Peace Research at the Mennonite Archives of Ontario: 1923-1946

The Beacon (earlier entitled The Norther Beacon) was the newsletter produced by men in Alternative Service camps in Canada.Copies are located in the Milton Good Library rare periodicals collection. 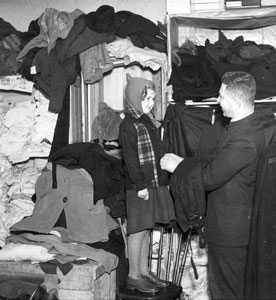 From 1923-1930, 20,000 Mennonites immigrated to Canada from the Soviet Union. The Canadian government assured Canadian Mennonites that the same military exemptions they enjoyed would also apply to the immigrants. Although immigration efforts were led by Mennonites in western Canada, Ontario bishop S.F. Coffman, experienced in dealing with government during the First World War, played an advisory role. The year 1924 marked the beginning of a significant Russian Mennonite presence in Ontario, when 1,340 immigrants were billeted in Ontario Mennonite and Amish homes.

While occupied with economic survival, the immigrants also grappled with questions of cultural and religious identity in their new land. Leaders such as Jacob H. Janzen sought to unify the scattered groups and reaffirm key doctrines, such as nonresistance. Immigrants were also dealing with traumas experienced during the Russian Revolution and Civil War. Their identification with German language and culture was the source of some tensions with non-Mennonite neighbours, particularly in the Leamington and Niagara areas in the late 1930s.

Post-war Ontario, like much of North America, saw dramatic social shifts, such as increased urbanization, advances in communication technology and changing roles for women. In response, Swiss Mennonites participated in the fundamentalist vs. modernist debates sweeping North American Christianity. These debates in Swiss Mennonite circles were filtered through changing Mennonite understandings of their Anabaptist heritage, and through the idea of “nonconformity” to the world. Although the main focus of nonconformity was dress for women, associations with non-Mennonites (such as engaging in legal action, joining unions, or participating in secular peace movements) were also discouraged. Leaders believed that strengthening Mennonite identity through Mennonite institutions, such as education and mutual aid, would preserve Mennonite beliefs and practices, including nonresistance.

Mostly dormant since the First World War, Mennonite peace and service institutions in Ontario experienced a reawakening in 1937 when the NRRO met to discuss a possible relief response to the Spanish Civil War. As war clouds gathered, statements affirming nonresistance crafted by Brethren in Christ and Mennonite conference groups were forwarded to the Canadian government.  In 1939, Swiss and Russian Mennonite conferences in Ontario, along with the Brethren in Christ and Mennonite Brethren in Christ (later the “Evangelical Missionary”) Church formed the Conference of Historic Peace Churches (CHPC). During the war years, this group would broaden to include other churches with nonresistant doctrines in Ontario, such as the Society of Friends (Quakers), Amish, Hutterites, and Old Order Dunkards. A few smaller groups were also represented. After doctrinal divisions had divided Mennonites and Amish in the late 19th and early 20th centuries, the CHPC provided these groups with a new common cause.

The CHPC successfully lobbied government to create the Alternative Service program. Under the program, an estimated 7,500 Canadian Mennonite conscientious objectors of draft age served at various work camps in northern Ontario and British Columbia. The program was administered first through the Department of Mines and Resources, acting on behalf of the Department of National War Services. Later, administration was transferred to the Department of Labour. In 1943, due to critical labour shortages, the program changed. Fewer conscientious objectors were assigned to camps, and more to work in agriculture and industry.

The CHPC and Alternative Service brought the various nonresistant groups in Ontario together. Encouraged by the unity of purpose achieved during the war, the CHPC began to plan for a post-war program of peace education and service. Meanwhile, the Ontario women’s sewing circles and the NRRO cooperated with MCC to provide relief supplies and workers to war-torn Europe. A Canadian branch of MCC was set up in Kitchener, Ontario, in 1944. In 1946, the NRRO was placed under the administration of the CHPC, and these various organizations grew even closer together.  Bibliography

Wes Brown fonds
A member of the United Church of Canada, Brown served in Alternative Service camps at Montreal River in Ontario, and in British Columbia.

John E. Coffman
Coffman served with Mennonite Central Committee in England during the Second World War. A son of S. F. Coffman, his correspondence and diaries are included in the family fonds.

Samuel F. Coffman fonds
Bishop S. F. Coffman was involved in immigration and peace issues during the inter-war years and with the CHPC and NRRO during the Second World War. He was also a member of the Peace Problems Committee of the Mennonite Church.

Mabel Cressman fonds
Cressman was a nurse who volunteered with Mennonite Central Committee in England and the Netherlands, 1944-1946.

John H. Enns fonds
A conscientious objector, Enns created a photo album of the Montreal River camp in northern Ontario, where he was engaged in Alternative Service.

John L. Fretz fonds
Fretz served in Alternative Service camps. After the war, he served in France as a relief worker with Mennonite Central Committee.

Joseph C. Fretz fonds
Fretz was historian for the Mennonite Conference of Ontario. He kept a file on the Second World War.

Osiah Horst fonds
Horst was in Alternative Service, and became an ordained minister after the Second World War.

Robert James fonds
As a student, James researched community tensions in Leamington during World War II. The fonds consists of his research notes.

David K. Jantzi and Lavina B. (Kuepfer) Jantzi fonds
David served in Alternative Service in Ontario and British Columbia and later became an Amish Mennonite minister. The fonds consists largely of the correspondence between David, Lavina, and other family members during his time in the camps.

Jacob H. Janzen fonds
An elder among the Russian Mennonites in Ontario, Janzen was heavily involved in peace issues before and during the Second World War.

Rufus Jutzi fonds
Jutzi served in Alternative Service in British Columbia, and kept a diary and other notes from his experiences.

Jesse B. Martin fonds
A Mennonite bishop, Martin was heavily involved in the work of the CHPC's Military Problems Committee, among other peace efforts, during the Second World War.

J. Harold Sherk fonds
Sherk was a Mennonite Brethren in Christ minister, and worked with the CHPC during the Second World War to support conscientious objectors.

Ernest J. Swalm fonds
Swalm was a Brethren in Christ bishop and chairman of the CHPC for 25 years. He kept a file of notes, clippings and correspondence on peace, including materials relating to the Second World War.

Peace Problems Committee of the Mennonite Church fonds
A Canadian section of this committee was formed in 1925. S. F. Coffman and Jesse B. Martin were prominent members.

Leamington United Mennonite Church fonds
A file of photographs of vandalism at the church linked to anti-German sentiment, 1940.

Interview with Jake Boldt (1925-2010)
Joined the army during the Second World War and served with the military police. After the war, he came to agree with the Mennonite peace position. Hist.Mss.9.24.16.

Ontario Mennonites in World War II
Interviews of 6 Ontario men who were Alternative Service workers, served under agricultrual or industrial exemptions, or who served in the medical corps.

Russian Mennonite Immigrants oral history project
Audiotaped Interviews of 82 Russian Mennonites recalling life in Russia before, during and after the Russian Revolution and civil war, and immigration to Canada.

These oral history interviews were conducted by Marlene Epp as research for her dissertation Women without men: Mennonite immigration to Canada and Paraguay after the Second World War (University of Toronto, 1996). Interviewees recall life in Mennonite communities in the Soviet Union before the Second World War, life under German occupation, the "Great Trek" of Mennonites westward following the German army, life as refugees and resettlement in Paraguay or Canada.

Going by the Moon and the Stars
Stories of two Mennonite women who escaped the Soviet Union during the Second World War and subsequently immigrated to Ontario, filmed 1992.

Government Records in the Mennonite Archives of Ontario

Einwandererzentralstelle (EWZ) collection
The EWZ files were created between 1939 and 1945 by the German government. They contain information on approximately 2.9 million ethnic Germans who were processed by the Center for Immigration and Naturalization during the war.

Mennonites in Canada microfilm collection
These films, obtained from the Public Archives of Canada (now Library Archives Canada) and the National Archives of the United States, contain records relating to Mennonite immigration, and conscientious objection during the Second World War.