Find speeches and monologues in the Library's collection

Use the Library's search to locate speeches and monologues.

To find speeches, try keywords such as speech(es), orations, and the name of the person giving the speech (e.g., Winston Churchill). You can also search by subject heading, using keywords speeches and addresses.

To find monologues in the Library, search by keywords such as monologue, soliloquy, and audition.

When looking for speeches within databases, keep these tips in mind:

ABI/INFORM contains a collection "Vital Speeches of the Day."

To find speeches limit your search by document type: Speech/Lecture. See the screenshot below. 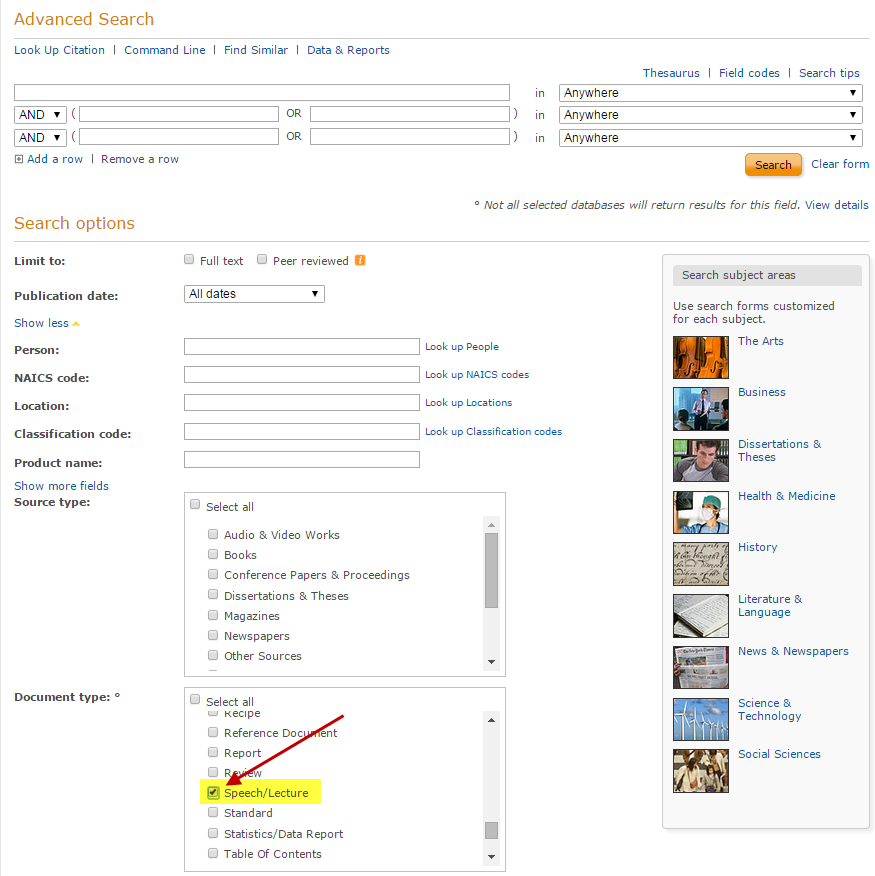 These resources are available through the University of Waterloo's Media Resources catalogue (links provided below) or through the Internet.

Title: The Speeches Collection
Synopsis: Before the advent of television, political careers were often built through the powers of oratory. And although television has provided a new tool for reaching the public, there is still nothing quite as stirring as a great speech. Included in this series are some of the best, delivered by the great names throughout world history. Included in this series are speeches by: Douglas McArthur, Dwight D. Eisenhower, Franklin D. Roosevelt, Harry S. Truman, John F. Kennedy, Richard Nixon, Winston S. Churchill, Adolf Hitler, Robert F. Kennedy, and Martin Luther King, Jr.

Title: American Rhetoric: Online Speech Bank
Description: This website provides an index of speeches from everyone from Abbott & Costello to Woodrow Wilson. In most cases the speech is provided in video with a transcript. This resource has an American focus.