Skip to main content
It looks like you're using Internet Explorer 11 or older. This website works best with modern browsers such as the latest versions of Chrome, Firefox, Safari, and Edge. If you continue with this browser, you may see unexpected results.

This page contains promotional information about the University of Waterloo's Special Collections & Archives, located on the first floor of Dana Porter. The collections featured here focus on Drama related materials available for viewing. 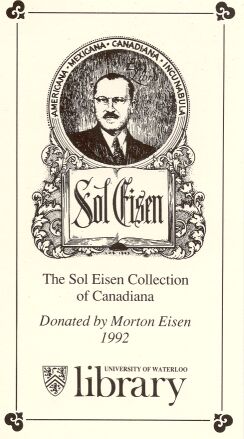 The Sol Eisen Collection of Canadiana is a collection of 179 rare, and in some cases, previously unrecorded, books, pamphlets, and printed ephemera from Quebec, Ontario, and Western Canada.

Sir Tyrone Guthrie (1900-1971) was born in Tunbridge Wells, Kent. At age 18 he received a history scholarship to St. John's College, Oxford. Fonds consists of a letter dated May 10, 1970 to Marvin Brown, Associate Dean of Arts, University of Waterloo.

The fonds consists of a single letter to Sir Oswald Stoll, a British theatre manager, from Cyril Joad, a philosopher, regarding a book written by Sir Oswald, dated February 16, 1928.

The fonds consists of a ts. play written by Royde-Smith titled "Mafro: A Comedy in Three Acts." The play is dated March 1929 and was apparently unpublished. An inscription on the cover page reads "To W. Graham Robertson from Naomi Royde-Smith."

Special Collections & Archives, located on the first floor of the Dana Porter Library, houses a great number of early editions and rare books, as well as materials that require extra attention to their use and storage. There are several collections within these holdings that may be of interest to those doing Drama research. Any of the links on this page will direct you to the Special Collections & Archives page where more information about these materials can be found. 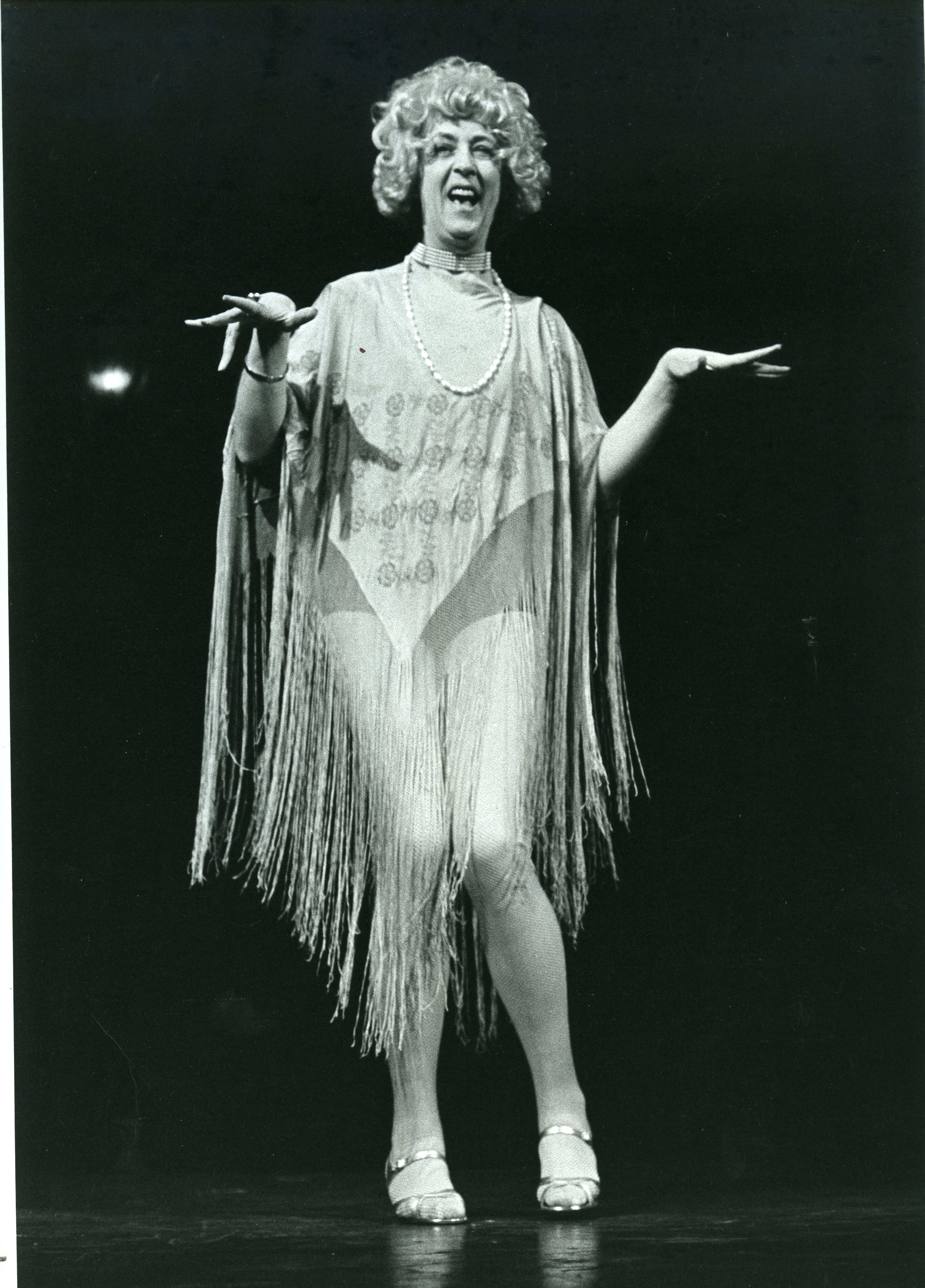 John Herbert in 'Bay Street is a Girl's Best Friend', as Lorelei Leech the golddigger, from "The Wonderful Whores". This production took place with the Maverick Theatre Company, at the Poor Alex Theatre, in Toronto, from January to March, 1978.
Image provided by Special Colllections and Archives. Used under fair dealing. 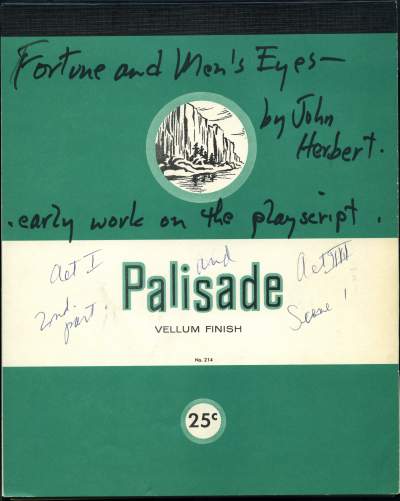 Just one of the many items available in the John Herbert fonds, the above is the cover of a workbook in which John Herbert collected his early writings of one of his most famous plays "Fortune and Men's Eyes".
Image provided by Special Colllections and Archives. Used under fair dealing.

This collection consists of 353 playbills from theatres throughout the United States, primarily from the 1920s. Below, find a sampling of some of the vibrant and interesting historical playbills. 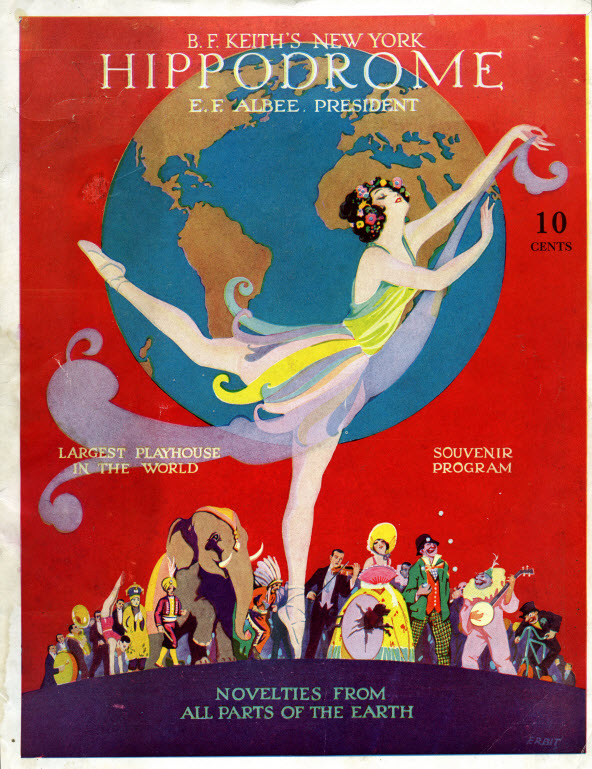 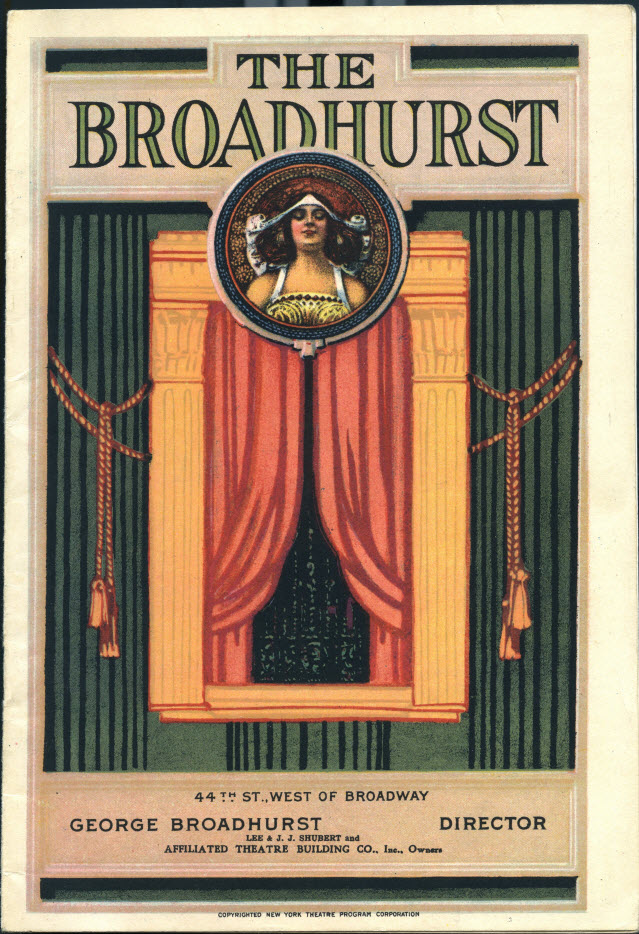 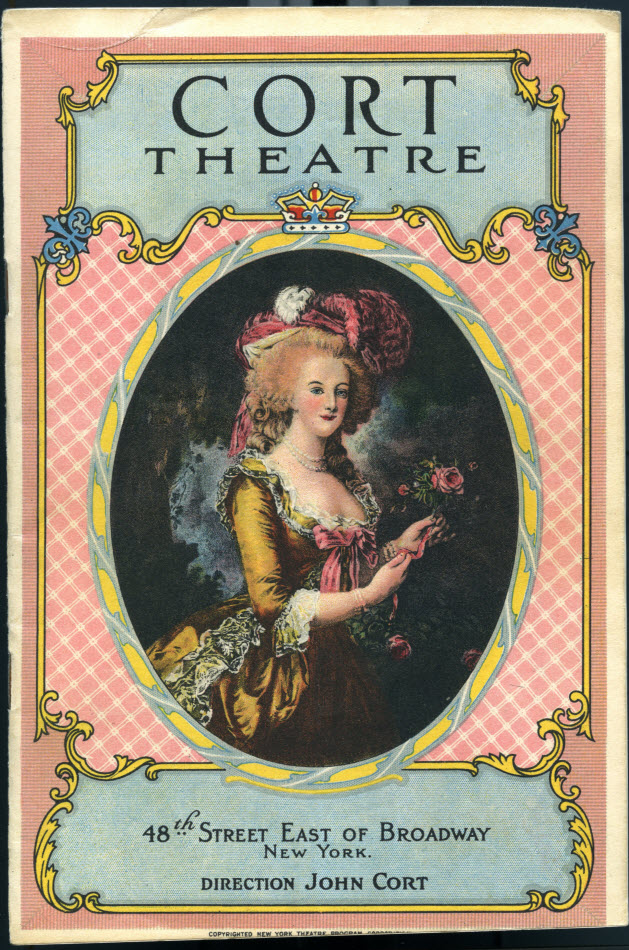 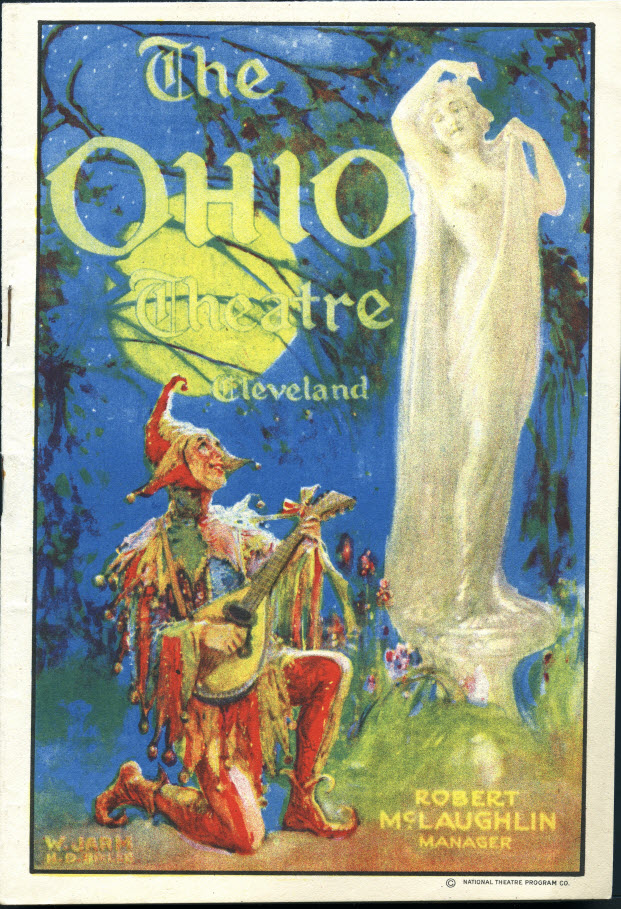 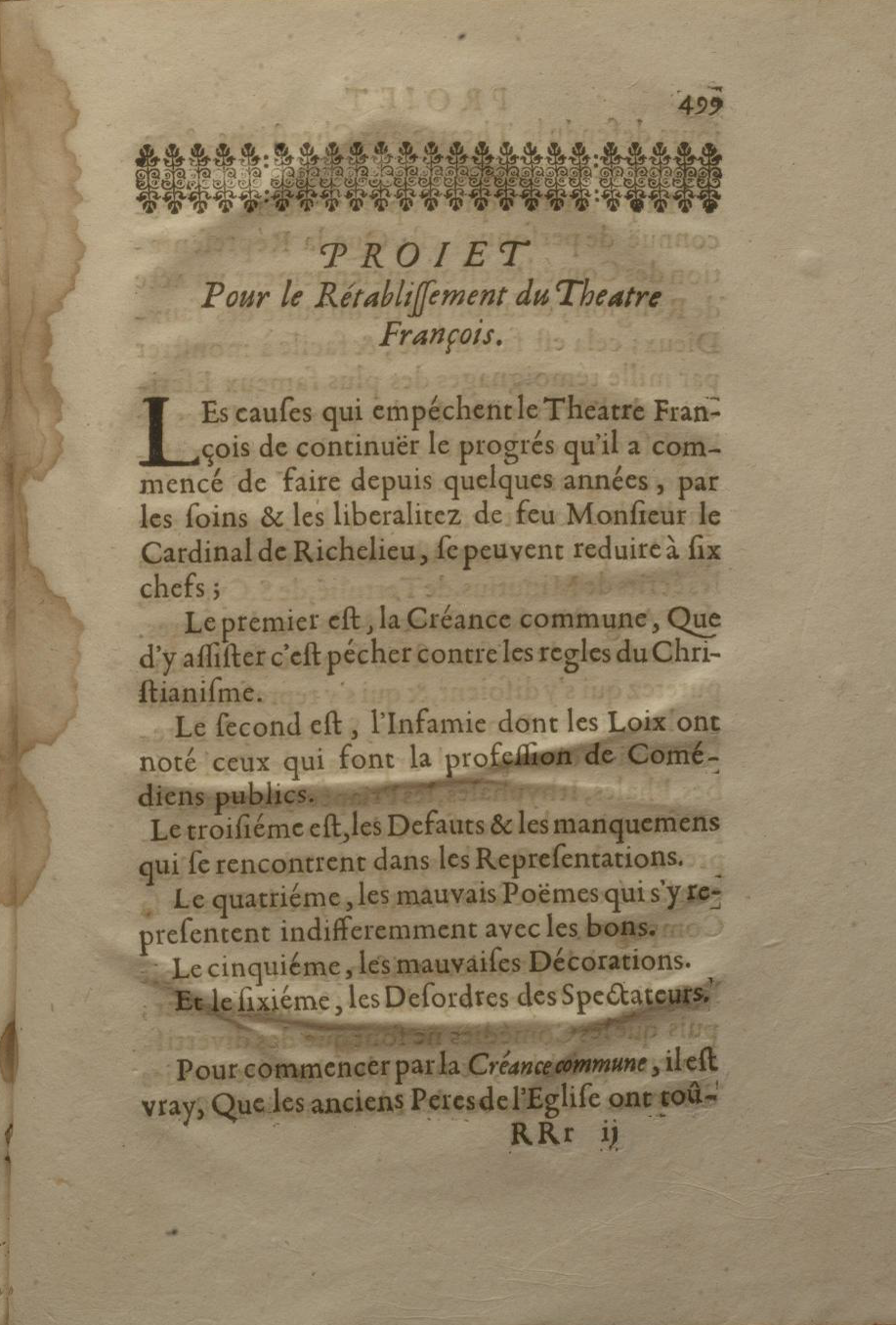 A translation of the text in the photo:

“The causes that prevent French theatre from continuing the progress that it has started to make for the last few years, by the care and liberality of the deceased Cardinal of Richelieu, can be reduced to six main ones:

The first is the common belief that to attend is to sin against the rules of Christianity.

The second is the manner with which the laws have stigmatized those who have the profession of public actors.

The third is the faults and deficiencies that one finds in the productions.

The fourth, the bad plays that are produced indiscriminately with the good.

The fifth, the bad sets.

And the sixth, the unruliness of the audience.” 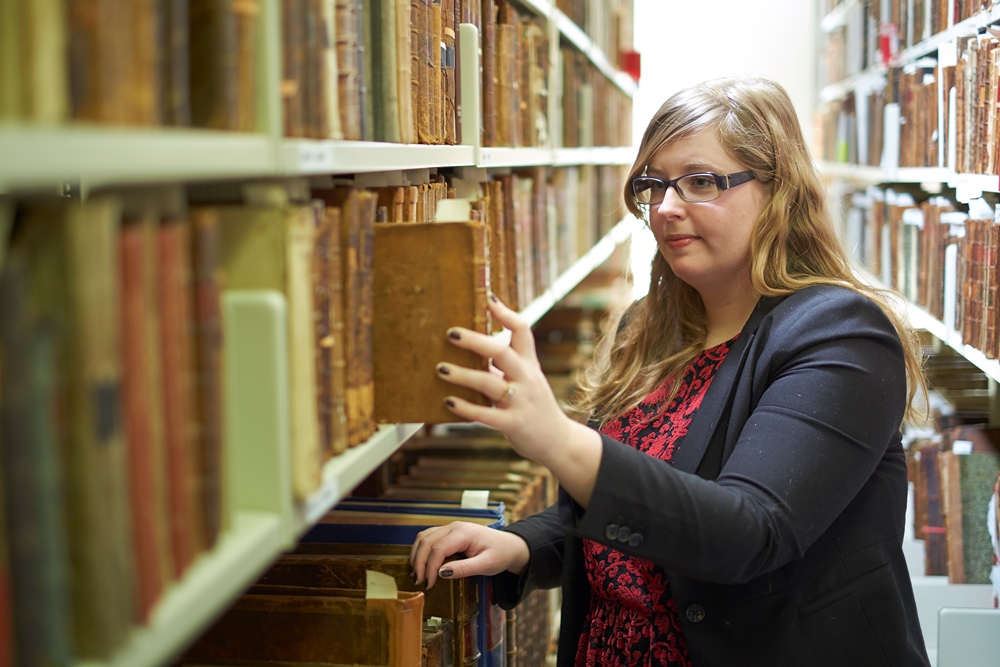